Why There Is No Diversity Among GTA Players 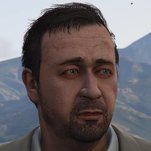