[RE:LCS] Cutscene Characters into the gameplay 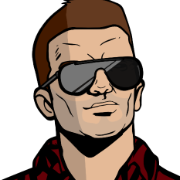 By Cleoude,
March 16 in Characters