Theory: The fate of the still alive GTA 3 characters 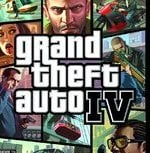