Missing track piece in the stunt creator since After Hours update 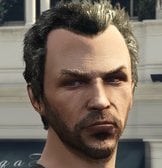