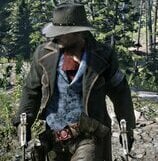 "Well, maybe when your mother is finished mourning your father, i'll keep her in black...on your behalf" discussion.