Will you play Good or Evil in your 1st RDR2 Playthrough? 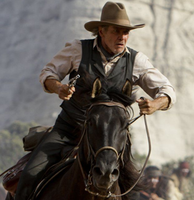 How will you play RDR2 the 1st time?