Did R* close the back entrance in "That Sinking Feeling" ? 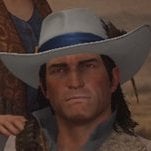