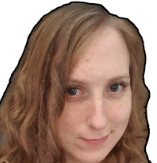 What do you think of my new avatar? :D