Met a dude in freemode recently who taught me some parkour techniques like how to maximise jump distance and how to get on rails to reach places previously inaccessible on foot. I had no idea there wa 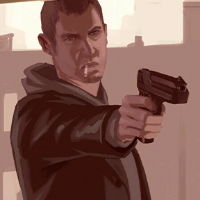 Hello, I came here to share a short movie I made in GTA IV a few days ago. It's the first ever machinima I created in that game (and possibly the only one). The story may be a bit wacky but I had fun

Was just listening to Opie and Anthony and found this...